Who is this Laura Hadland then?

Ciao! I am a food obsessed Jack of All Trades living in Leicester. As you’ll see, if you take a good scout around, I started this blog in 2008. It was the follow up to a Live Journal I had had during uni. There was no real impetus to start the blog except I enjoyed writing about the things I cared about.

Over the years, what I write about and how I write has been refined. Now my focus is mainly on three things – food, drink and Leicester. Occasionally other stuff creeps in, but it’s my blog and I’ll write how I want to. Over the years, people have come to value my honesty. If I’m invited along to an event I’ll thank the business in the post, but I’ll still give you my unvarnished opinion of their offer. Warts and all. But also credit where it’s due.

The latest installment saw me pregnant for the first time in 2018. I added a new section on family and pregnancy and was excited to see where it took me. I could not have predicted the journey that came next – my son Pixie was stillborn at 41 weeks and I wrote in depth about our experience. Then, I am overjoyed to tell you we were lucky enough to fall pregnant again. Our rainbow baby, called Bam Bam on here, arrived in 2020 during the Coronavirus pandemic. Quite an adventure so far!

Why is it called Extreme Housewifery?

Many people have asked me this over the years and I have tried to answer in a number of ways. But ultimately it boils down to “Why not”? My first Gmail account had a user name that referenced an old BBC series called ‘I am not an animal’. This is an excellent and hilarious series that I am happy to loan to you on DVD if you are unfamiliar with it.

Part of the schtick was a muscle-bound animal rights activist, who was chastised by the talking animals… You probably have to watch it… “Alright Ray Mears Extreme Survival!” So originally the blog was called Ray Mears Extreme Housewifery. Then I dropped the Ray Mears, because I realised I wasn’t really sure whether it was ecumenically permissible to take the name of Mr Mears in vain. Then I stuck my own name on the front instead, because for better or for worse, that’s what I got called. And the rest is history, present and undoubtedly future as well.

It doesn’t really make any sense, or mean anything. But it worked well when I broke the Guinness World Record for the Biggest Toast Mosaic.

And now, to celebrate its 10th birthday, I have finally bought the blog its own domain. Probably should have done that straight away, my domain authority would be through the roof. But who cares?

Where are you now then Laura Hadland?

Although I don’t make any money from this blog (well, there was that £20 for that one post) writing this blog has quite literally changed my life. When I began the blog I was three years into what transpired to be a 12.5 year stint as a Senior Curator. However, during that time I met fascinating people, I tried interesting new flavours and I was lucky enough to do a fair bit of travelling. You can read all about it – there are nearly 950 posts that chart much of my journey. 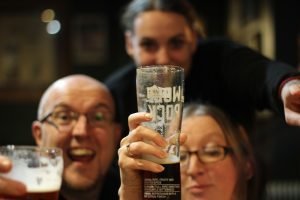 Writing my blog opened up opportunities to write for other people. I did restaurant reviews and food features for the Leicester Mercury. I have written pieces for print and online magazines like Dluxe, Cool As Leicester and Niche Magazine. Organising real world events like the Leicester Tapas Trail put me in the heart of the local foodie community. And my love of wine grew and grew.

In October 2017 I quit my vocation, and took on a new one. I founded Thirst Media, a company that brings mine and The Boy’s passions under one umbrella. Food and drink writing, working with small businesses on marketing & PR, photography, graphic design, event organisation including private wine tasting, audio production and library music creation, band management, videography and a whole lot more. Without the experience and contacts I gained from Extreme Housewife this would never have happened. I’ve never been happier.

Having spent three years volunteering at Rothley Wine Estate (after visiting for the first time to write them up for the blog), and going to innumerable wine tastings, on vineyard tours, spirit tastings and more this year I have decided to try and get serious about my beer, wine and spirit skills. Enthusiastic amateur is no longer enough for me.  In 2018 I have undertaken WSET Level 1 & 2 and passed – with 100% and 96% respectively. Boom. In December 2019 I took my WSET Level 3 – having discovered I was pregnant just a couple of weeks in. And in February 2019, the results were in – a pass with merit in the tasting exam, and a pass with distinction in the theory exam. I couldn’t have been happier.