For the first time in about a year, I found myself at a loose end on the final Friday of the month. There’s only one thing to do in this town on the Last Friday, and that’s avail yourself of one of the many incredible street food pop-ups that our fair city is home to. I headed down to the LCB Depot because they always have a good mix of entertainment and art as well as food on offer. This is important for me because I can only really eat one thing, then I’m full! I know, I’m turning into a bit of a wuss in my old age.

This month’s food offering was as rich and diverse as you could ever expect. Once again, I was spoiled for choice as to what to pick. Making a bit of a splash on social media I had seen ‘Huns’ with their vegan ‘chicken’ burgers, which looked like deep fried loveliness to be sure, although I’ve not been able to establish what exactly they are made from. And I still don’t know, as the vegans I cornered whilst enjoyed their Chickhun BBQ Burgers said the flavour was fantastic, but they could not tell me what it was.

Along with this there was the Caribbean inspired stylings of BoxFood, Mexican street food with Smoqued and a delicious sounding poutine option (and the rest) with Fancy Fries. Sweet toothed guests were catered for with EdiBubbles and their freshly made bubble waffles. As if that wasn’t enough, you could keep your whistle thoroughly moistened by attending the Gray’s bottle bar, the pop-up cocktail counter in the LCB Depot or the LCB Festive Bar outside in the courtyard, where absolutely delicious aromas of mulled wine rose up from the steaming urns. 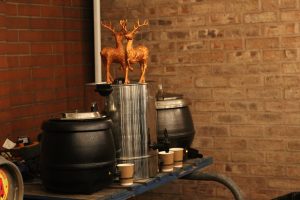 In the end I plumped for an old favourite of mine, Big Daddies Diner. They’re Mac Daddy hot dog was too much for me to resist. A large chilli beef hot dog was covered in freshly made mac n cheese, topped with a homemade sweet BBQ and mustard sauce and pieces of Synders honey mustard pretzels. It was a real monster! I know this to be the case because the hot dog was too much for my puny plastic fork to cope with. When it promptly snapped I was forced to tackle to beast with my bare hands. Which is probably as nature intended. 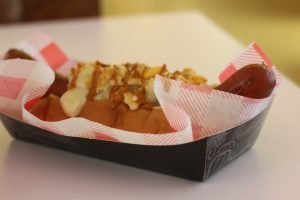 I really loved it. The chilli and mustard heat wasn’t too intense but left your mouth pleasantly tingling, and this was balanced out by the rich creaminess of the mac and cheese. As expected, I was more than full after taking down this bad boy, so I wandered around to take advantage of the other amusements on offer.

It was the closing date of the Momento Mori exhibition, which I have really enjoyed. Tim Fowler live painted 100 skulls in the gallery for the installation and as the final celebration kicked off all of the artworks went up for sale to the public. So popular were they that they sold out within three hours, which I don’t find too difficult to understand – I will confess to being tempted myself!! There were also DJs performing and comedians at regular intervals throughout the evening. 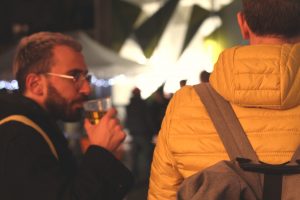 The event had been timed to coincide with CQ Lates, so you could hop in a cycle rickshaw around the Cultural Quarter to catch the other happenings – I particularly liked the live music on at Leicester Print Workshop that night! And Leicester Start Up Week were having their founders social, so lots of buzz around local entrepreneurs and their great new concepts. Phew!

If you’re not a big fan of queues, I’d definitely recommend getting there early to grab your food straight away. That frees you up to get a drink and enjoy the music and other entertainment in peace, while everyone else is queuing for their street food from the various stalls and renovated vans!

The piece de resistance of the evening was a live performance by Marcus Dove of his amazing smoke grenade artwork.

Those wanting to carry on the party were invited over the road to Manhattan34 who launched a new Last Friday Afterparty from 10pm. They had a whole range of bespoke cocktails developed especially for the event as well as a live band for everyone to get their groove on to. 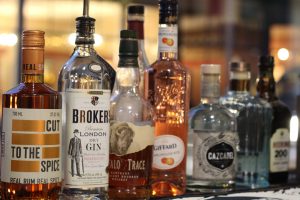 This is the sort of thing that happens on the last Friday of every month at the Depot, although December will be a little different as ‘Last Christmas’ will be on offer instead – on 15th and 22nd December you can hold a Christmas party with a difference at the LCB Depot. Ticket price includes a cocktail on arrival, three course street food menu (choose what you want on the night from an amazing selection) along with real ale, cocktail bar, burlesque performances, horse racing, live music and DJs just for a start! A step up from a lukewarm turkey dinner at a faceless chain pub I’m sure you’ll agree! 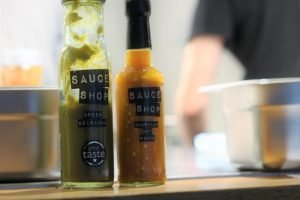 Thanks to the crew at Grays and the LCB Depot for inviting me along to Last Friday this month and throwing me a hot dog on the house. My opinions of the event are unaffected by this (admittedly delicious) freebie.