I had the privileged of being invited to the King Power Stadium yesterday for a slap up lunch in celebration of the launch of the 2019 Wheelchair Rugby Quad Nations tournament. Once again, this worldwide competition between elite athletes will be held right here in little old Leicester, with King Power as their headline sponsor.

Originating from the game Murderball, developed by a group of Canadian sportsmen in the 1970s, wheelchair rugby took inspiration from both wheelchair basketball and ice hockey. It is a brutal, fast paced sport for players who meet a minimum disability criteria. Each athlete has a functional classification and their score contributes to the team’s overall score of a maximum of 8. This makes the game relatively unusual in having people with different levels of function competing directly against each other.

The tournament will take place at the Morningside Arena from 1st to 3rd March 2019. Our little soiree at the King Power allowed for some of the city’s great and the good to meet some of team GB, find out more about the event and, most importantly, saw the announcement of the four teams that would be competing in this year’s competition. 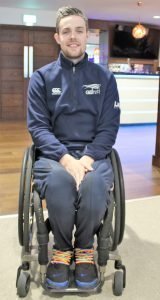 I was lucky enough to be seated next to the charming Chris Ryan (the man with two first names), the captain of Team GB. They are currently ranked 5th in the world and will be looking at the games in the tournament as a way of improving this ranking. The other teams set to play in 2019 are Japan, Canada and France. With Japan and Canada sitting directly above Great Britain in the world rankings this is an important performance opportunity before the World Wheelchair Rugby Challenge which will be played alongside the Rugby World Cup in Tokyo. 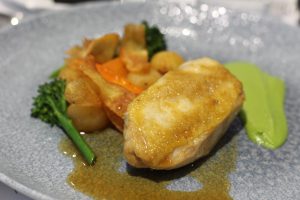 Chris gave me a real insight into the sport over a delicious lunch in the Director’s Lounge at the King Power. The introduction to the sport and to the team was fascinating, as was the sobering reminder about how random life can be. It’s an incredible achievement to become an athlete on an international level in any sport, but to do that on the back of a life-changing illness or accident really ramps things up a notch. 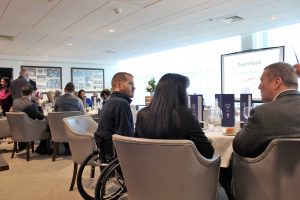 However, the frenetic action on the court will capture your attention, with the speed and skill that the players show. Essentially, you just have to cross the line delineated by a white cone to score a try – simple right? But this four on four game, conducted in specially designed wheelchairs is nothing short of vicious. A proper spectator sport for those who enjoy seeing true skill as well as grit and determination.

Find out more and get involved

At the tournament last year, thousands of people were introduced to the sport, and organisers are hoping for more of the same this year. Special Family Days and School Days ensure that a new generation discover the excitement of the sport at a young age. I have always noticed that the Morningside Arena is well equipped to be an accessible space as well as a very family friendly environment, so I can see this working really well. You can find out more about the tournament and how to get tickets at the Quad Nations website.  Organisers are also looking for further sponsorship from local businesses who wish to support the internationally screened tournament – again, get in touch via the website if you’re interested!

Thanks to Team GB for inviting me along, and the King Power for being such gracious hosts, including giving me the opportunity to say a big hello to my LCFC favourite, Shinji Okazaki!!