I was very lucky to win a competition on Instagram recently which bagged The Boy and I a slap up dinner at Peppercorns in Anstey – with us just having to pay for our drinks! I was really pleased to win this as Peppercorns Cafe have only recently started their new tapas evenings, so I hadn’t yet had a chance to try it.

What’s it all about?

The concept is simple – you arrive in time for service at 8pm on Friday or Saturday and they produce 9 different tapas dishes which they offer to each table one by one. Take the ones you like the look of, pass the ones you don’t and each plate is £5. There is also a final dessert course for plate 10. You must book in advance.

Chicken in a tomato sauce

I really liked how intimate and cosy it was. Peppercorns is a lovely cafe in the day and one which I relatively regularly use for meetings with clients in the day because they do a nice cup of coffee! In the evening, the lights were dimmed and the fairy lights were out, but the same hallmark friendly welcome was there. There are no airs or graces, just good home cooked food served by an enthusiastic team who care that you are having a lovely time.

What did we eat?

But it was really enjoyable! The first course was by far our favourite – baked goat’s cheese with a warm pepper salsa that was full of complimentary flavours – tangy, sweet, sour, with a lovely earthy herby note from the black crust on the cheese. A real triumph. We also enjoyed the albondigas, which had some kind of breadcrumb layer on the outside giving them an extra crunch which was really very pleasant.

There were some delightfully authentic Spanish flavours in there – like the sardines (although I’m not sure how Spanish cous cous is – I can imagine it’s most popular in the south of Spain if anywhere), or the garlic mushrooms cooked in white wine which were absolutely luscious (although again served as a bruschetta strikes me as an Italian thing…)

This is a new venture and the team are finding their feet with the dishes and the service, but I do not say this with malice. There were a couple of elements I look forward to seeing tightened up next time I visit – particularly the spicing and the cooking times. A couple of dishes needed more low and slow than they had received – like the paprika potato cake which was served with a small piece of cod – this was sadly underdone in areas, which gave some hard bits of potato but also meant that the hot paprika was not sufficiently cooked out making the overall dish unbalanced with an overly harsh spice. The poor cod didn’t get a look in flavour-wise, when it should have been the star of the show. We heard a couple of other tables remarking about how hot it was too.

The Patatas Bravas and the Tortilla dishes also struck me as not quite being the same great value for £5 a dish as the others. In particular the tortilla seemed to just be two small fingers of slightly strangely fluffy/chewy omelette when I was expecting a traditional ‘cake’ of potato, onion and egg – or perhaps peas, onion and egg. I couldn’t find any ingredient other than egg at all. I don’t profess to be an expert in Spanish cuisine, but something was definitely lacking there and I felt the portion size was rather miserly given that the ingredients are so simple.

But plenty of areas for praise

As with so many things in life, the simplest dishes were the best! Chorizo and Morcilla make a classic combination and my only complaint was that the Morcilla pieces were much smaller and far fewer in number than the chorizo! Which is not a bad complaint to have all things considered.

Dessert was a choice between Spanish orange cake served with an affogato, chocolate brownie or a selection of ice cream. Spanish orange cake sounded the most Spanish! So that’s what we ordered. Another highlight – served warm the cake had an absolutely beautiful texture, a great orange flavour and was just really, really spot on. It went pretty well with the affogato (which of course is the Italian dessert of gelato ‘drowned’ in espresso, as affogato is the Italian word for drowned… Say no more…) and The Boy and I both agreed that the cake was the straw that broke the camel’s back and filled us both to breaking point. It was a lazy waddle home I can tell you!

I really enjoyed the atmosphere and the intimate, friendly service. The pace of the evening was pretty well managed – although we did wonder how much fun you would have if you found a run of, say, three dishes that you didn’t fancy – you could have quite a wait between courses. 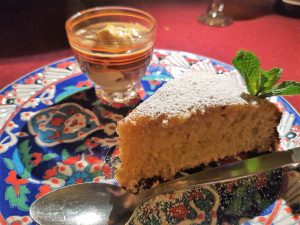 As with all tapas, this is great for sharing. It’s really lovely to have another option for Spanish food, as we only really have Barceloneta and Madeira A Vista otherwise (both of which are pretty good, but a change is as good as a rest!). The concept is kind of fun, but only if you think you’re likely to want to eat most of the courses. There is no menu – you just look at the dish and have it explained to you and then say whether you’d like it or not, so if you are a picky eater, or perhaps have allergies, this is not going to be for you. As you can see from the selection above, vegetarians are likely to be relatively well catered for – 4 tapas dishes and all 3 dessert selections were vegetarian friendly.

I get the feeling that Spanish cookery is a relatively new departure for the kitchen team here, and considering that they have put together a lovely evening. I believe in a few months with a little more practice and a bit more confidence they could build an offering that is truly great.