After the popularity of my post about the food of Piemonte a few weeks ago, writing about some of the local foods I encountered on our recent trip to Sicily was a no-brainer. 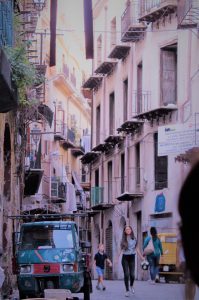 I was immediately taken with the haphazard, noisy streets of Palermo’s old town. It has grown organically over the centuries and magnificent palaces sit cheek by jowl with bustling street markets. It is a really fun place just to wander around and take in the sights because you can literally never guess what will be around the next corner. 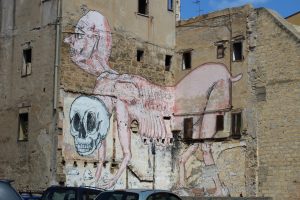 I was excited because Sicily’s extensive history is marked by the movement of waves of people. This has led to a culinary repertoire that is diverse and constantly evolving. Having come straight to Palermo from Turin, this was marked even in simple differences like sesame seeds on bread and a substitution of breadcrumbs for Parmesan topping pasta dishes. 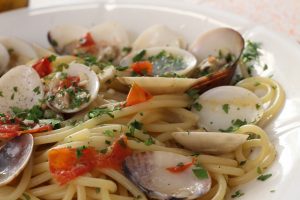 Although I was keen to dive right in, I quickly learned that sampling all of the food delights that Sicily has to offer is easier said than done. That’s because everything is SO DAMN BIG! Seriously. My first morning in Palermo I eagerly rushed out to buy an arancina at a nearby cafe. These deep fried rice balls are absolutely ubiquitous in Palermo. You tend to find them in two main types, carne – filled with a meat ragu with peas, or burro – inexplicably ham and cheese filled. There are more exotic varieties as well, like salmon for example, but I stuck to the classics.

And yes, it is arancina, not arancino! (Or even many arancini – in Sicily it would be many arancine, but no-one can eat more than one so it’s irrelevant.) They make it a feminine word as this suits the curves better apparently… 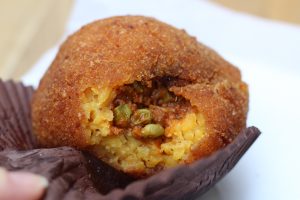 Trouble is, one of these bad boys weighs in at around 1.50 – 2.50 Eur and is the size of your fist. They are delicious crispy golden spheres, filled with perfectly seasoned rice, sometimes with a light hint of saffron and generous fillings. And filling is the optimum word. After that first morning’s arancina delight, I was so full I didn’t need to eat again until dinner that evening. That was lunch, and not to mention snack opportunities cruelly snatched away.

And such was the rest of my trip. Deciding what I wanted to eat during our rambles around the city and then desperately waiting to be hungry enough that I could actually fit something else in. So a few of the classics I did not get around to sadly. Like the Pani Cà Meusa, a sandwich made of fried beef spleen with a splash of fresh local lemon juice. Or the frankly slightly odd Panelle and Croquettes, which is another sandwich, but this time the bun is filled with potato croquettes and small flat square fried chickpea flour crackers. This is perhaps one of the most traditional street foods in the area. I saw loads of people eating it, but I’ll be honest, it sounds mighty dry. Give it’s nature as an uninhibited carb-fest, this was naturally one of the options I had to swerve, given that I was so full all the time!

Palermo seems to run on it’s street food. A couple of Euros here or there for a filled bread, a pizzette or some other doughy creation keeps you going for hours. The absolute pick of the bunch is the street food vendor Panineria Friggitoria Chiluzzo. You know they’re good because, if they’re open, there is a massive queue. Don’t ask me what the opening hours are, it doesn’t strike me as that kind of place. But the beers are cheap, the arancina are fresh and there is plastic garden furniture to settle on while you eat. They do an amazing variety of deep fried treats (Rosticceria), pretty much anything in a sandwich, incredible grilled aubergine… and if you’re really hungry then try the baked ham and cheese rice. You will never need to eat again.

Of course, the sea food is divine. I discovered my new favourite pasta in a tiny family run seafood restaurant. Prawns, courgette and pistachio pesto. Unctious and nutty and sweet and delicious. 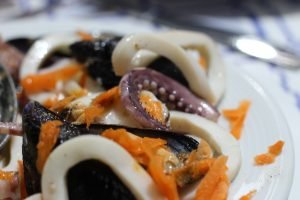 We also made our way through whole populations of tiny deep fried squid, bigger squid, clams, mussels, fresh fish – filleted and whole. It would be rude not to!

The Sicilians appear to have a crazy sweet tooth. They are well known for their brioche and granita combo as a breakfast treat in the hot summers. Believe it or not, this is also Sicilian street food! I got one, but managed to pretty much pick the worst looking, most inauthentic one in Palermo, so chalk that up to experience! Sometimes you just need a local guide!

However, they also have a huge range of (massive) pastries, and a specialist line in faux fruit made entirely of marzipan. I didn’t quite understand if anyone actually ate them or if they were just for decoration. It seemed like too much marzipan for one person to safely eat. But then I’d never attempt to eat a whole Cannolo, which are being freshly filled with ricotta everywhere you look in the city. 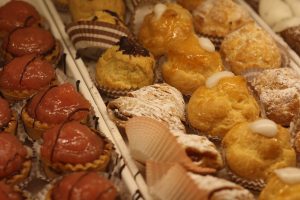 Boom! A flavour combination that was not on my radar that I totally brought home with me was pork and fennel. Here, we would have pork mince ‘sausage’ combined with fennel seeds and well salted. These were cooked on a grill and served as a secondi or (as with seemingly everything in Palermo) inna’ bun. 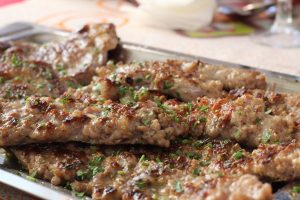 I also became a big fan of the traditional Sicilian caponata, traditionally served as part of the antipasti. I was a bit reticent about it at first as I associate caponata mainly with olives – which I (still) don’t like. However, in Palermo the caponata is aubergine based, gently fried up with other vegetables and tomatoes. Yes, there are often olives in there, but it is not predominantly the flavour. You can work around them if you’re desperate. I am a massive aubergine fan, so the proliferation of this ingredient in starters everywhere was a bit 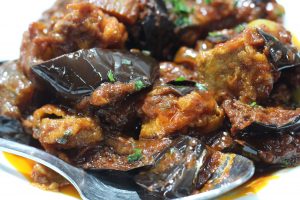 Undoubtedly this whistle stop tour has grossly mis-respresented the diversity of the Cucina Siciliana. I’m sure I have placed emphasis in all the wrong areas. I know for a fact that there were more kinds of Sicilian street food than I could hope to detail in one short article! However, this was my experience in the short time I stayed there. I look forward to one day going back and having the chance to learn more about this multi-ethnic, delicious cuisine!