Gelato in the Square Tasting Menu

It’s been a gelato heavy few months, I’ll be the first to admit that. But you don’t turn down a gelato tasting menu. Having barely recovered from the trials and tribulations of Sherbeth, the largest natural gelato festival in the world, we hurtled headlong into Gelato in the Square at Gelato Village here in Leicester. One of the highlights of this internationally significant gathering of Maestri Gelatieri here in the city was a six course paired menu devised by Delilah Fine Foods, one of Gelato Village’s near neighbours. They were named the UKs best deli in 2017!

The concept behind the menu was taking 6 of the special festival gelato, sorbetto and granita, incorporating them into a dish and then pairing that with an Italian wine. At £32, tickets for this event were very reasonably priced, and the wines used were also very reasonable. The most moderately priced was the Nero D’Avola Caleo, which comes in at £9.99, while the most expensive was naturally the Limoncello di Sorrento, which was still very reasonable at £23 a bottle.

As well as having a fabulous menu, this event was given an extra dash of glamour in that all of the guest gelatieri from all around the world were in attendance as well, so as well as an explanation of the pairings, we were treated to a little description of the gelato and the stories behind them. This made sense, because the theme of this year’s Gelato in the Square was ‘a unique flavour journey’ – and we certainly experienced that!

From a relatively young winery in Modena, this 100% Pignoletto sparkling had a lovely mixture of tree fruit aromas with a high acidity which made it much crisper than your average Prosecco (which is of course made with a different grape, Glera). This high acidity and fruit flavours matched well with the almost earthy savouriness of the tomato granita, cut through with vivacious basil. The whole thing was complemented beautifully by a crisp crostini and a creamy, rich burrata on the side which provided a pleasing variation in textures and tastes. 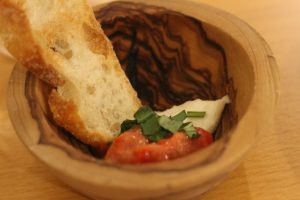 A really joyous pairing for me – this one had everything! Starting at the bottom we had a sweet, textured panforte. This was topped with a thick slice of delicious Beauvale cheese – a local blue that is slightly mellower than Stilton but has beautiful salty, silky character. On that was a dollop of freshly made Walnut & Ginger gelato, which complemented the nuts in the panforte and contrasted the savouriness of the Beauvale. Then all of this was beautifully tied together by the old vine Primitivo from Fillipo Baccalaro, which its gentle tannin and ripe fruit. 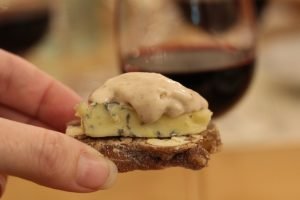 Next we travelled south to Sicily, with a black fruit Nero D’avola adding an element of depth to this pasta dish where the pistachio, caper and oregano sorbetto acted as a pesto. It was topped with a Coppa, made on the Welbeck Estate by Delilah and my good friends at the School of Artisan Food. The savoury earthiness of the preserved ham really pulled the dish and the wine together, but all elements had a good balance. 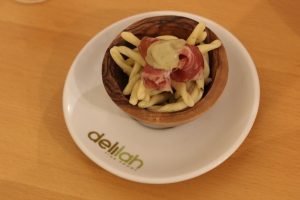 Phew, after all that lot it was time for a palate cleanser! And you could not get a zingier combination than limoncello with a tub of Sicilian PGI Lemon Granita! Pow Pow Pow! 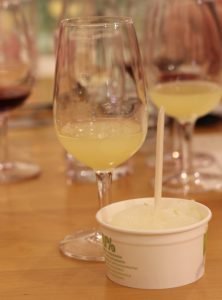 A surprising amount of fresh fruit and minerality in this delicious wine which benefits from the cooling influences of altitude and a moderate maritime climate despite being located so far south. This gave a lovely balance to the autumnal flavours of a fat slice of saltimbocca, wrapped around prosciutto and served with a complementary chestnut and sage sorbetto. 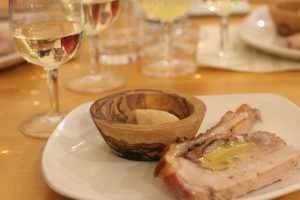 This Aleatico passito had delicious aromas of dried cherry and hints of dark spice and sweet spice from the aging. This paired phenomenally with the wonderful chocolate and peaty Port Askaig 8 year whisky in a gelato that was designed to examine the impact of patience and aging on ingredients. The gelato itself was made into a type of cranachan style dessert with oats and fruit coulis, which drew even more out of the passito. A beautiful way to end a delicious evening of discovery!

I attended the evening for free because… well… I helped to organise it!