It was an incredible few days in Torino last week, participating in the latest edition of Terra Madre. We were exhibiting at the last festival two years ago with Gelato Village, but this year I attended as press. This gave me a lot more freedom to explore and participate in the various activities this time around.

The Salone Del Gusto is a biannual affair that takes place around Turin in the Piedmont region of Italy. This is the birthplace of the Slow Food movement (actually just outside Turin in the small town of Bra, which holds the Cheese festival on alternate years to Terra Madre). The global significance of the Slow Food movement makes this one of the most important, and also one of the biggest food festivals in the world.

And it did not disappoint. The festival was mainly hosted in the Lingotto Fiere this time around, a large exhibition hall. There were three enormous halls of stands representing Italian cuisine and produce region by region. This was complemented by the large adjacent building, the Oval – built for the 2006 Turin Winter Olympics, which was given over to 300+ global food producers, the local University of Gastronomic Sciences and the Terra Madre kitchen. Finally, a huge array of outdoor stalls offered a mindblowing variety of street food and craft beers from Italy’s burgeoning craft ale scene.

What is Slow Food?

The overarching principle of Slow Food, as outlined by the most important members of the association in their keynote press conference, is to make sure that everyone on the planet has access to food that is Good, Clean and Fair – and access to enough food. From this principle we see a series of project threads emerge that seek to achieve this aim.

Throughout the festival there were talks and demonstrations about how Slow Food supports research and development into biodiversity, sustainability and climate change. The organisation defines Slow Food Presidia – geographical areas and food types that fall specifically within their protection, like the pistachios of Bronte Sicily, or the Slow Cheese presidia which protects raw milk traditional dairy production and remote mountain dairy farmers across international borders.

The festival gives the committed foodie an incredible insight into global cuisines, as well as how those foods are produced and recipes are developed. On the whole, the people running the stalls and putting on the demonstrations are the producers themselves so you have direct access to the most knowledgeable people. I can’t even begin to describe the variety that I experienced, but the things that stood out for me included Italian truffle infused cheese, Clairin Haitian rum (more on that in a later post) and a lemon myrtle infused beer that is a collaboration between Italian brewery Lirenas and an Australian farmer. 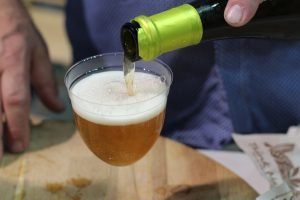 At the heart of this delicious event, there is a very serious message – that many people on Earth have too much and food waste is a huge problem and that on the other side of the scale many people do not have enough to eat and famine & starvation are their key issues. It was a joy to see so many school groups and young people visiting to take part in the various games and activities that helped them to learn about these important themes.

But where was the UK?

It was a little disappointing to see that only one UK producer was represented – Stichelton Dairy, a raw milk traditional producer who proudly displayed their ‘Bollocks to Brexit’ banner. This was despite the Gelato Village team being in attendance and offering their support to the gelato specialist area, which seems a shame as their commitment to using rare breed Pasture for Life milk in Leicester would have been a valuable contribution to the programme. I also found there to be a distinct lack of UK journalists present covering the event. Since we all are becoming more aware of our own food culture and its strengths and weaknesses here in the UK it seems important that we shout about it on the international stage. Not least with the horrors of Brexit looming.

My highlights from Terra Madre 2018

I really enjoyed the food pairing session held by our old friends La Cascinassa and local microbrewery Birra The Loop, who provided us with a delicious and fascinating beer and cheese pairing session along with an interesting description of the production methods of each. This was a lively example of ‘what grows together goes together’ and tasted fantastic as well!

The opportunity to try a range of food from around the world at the Terra Madre kitchens was brilliant. These were split into four international areas – Europe, the Americas, Africa and Oceania. Across the festival, more than 50 chefs from around the world took over the kitchens to provide a dish for the hungry crowds. I really enjoyed Liliana Duarte of Portugal’s dish, rather exotically named ‘a love story between tomatoes and rice with a jealous grumbling mushroom.’