Discovering the wines of Roero

We were invited to the gorgeous Demarie winery to discover the wines of the Roero region of Piemonte this week. We were shown around the winery by third generation vintner, Paolo Demarie. We also met his brother Aldo who was busy in the winery, and Paolo’s wife Monica also joined us as we were enjoying a tasting. 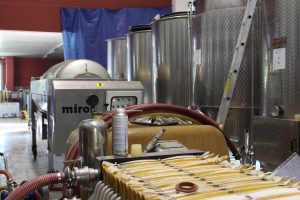 The winery is a relatively new facility and we were fortunate to receive such dedicated attention as the Arneis harvest was well underway when we arrived – the last pressing of the day having just been completed as we began our tour. It was interesting to hear about the different grape varieties that are permitted in the Roero – Arneis being the white and Nebbiolo (the same as that grown in Barolo if that is more familiar) being the red. Demarie also have some co-operative arrangements with other wineries so that they can also produce recognised Barolo and Barbaresco.

The fresh taste of Arneis just three days in to it’s fermentation.

As well as pressing the white wines and fermenting them in large steel vats, Demarie also passes on their white grape pressings – skins, stems, seeds and all across for grappa production. Even in this fresh state, you can already smell the beginnings of that familiar astringent yet fruity grappa flavour. I must confess that up until relatively recently I was in a totally anti-grappa place. But I have been shown the light. Now the final frontier is finding a cider that I really enjoy… 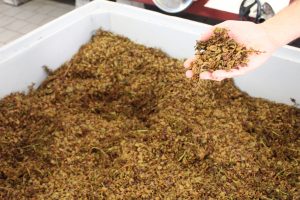 We saw the concrete tanks in which the red wines will rest in a couple of weeks time when they are picked, and looked over the selection of large and small barrels for aging the Roero, as well as the small amount of bottled wine stored on site to cope with immediate demand during the busy harvest period. It was clear that Paolo is engaged and passionate about his family business, with a charming quiet pride for his family’s obvious achievement and skill in oenology.

On to the smart new winery and the tasting began. They had a fantastic little display which put the wines in context with their soil type where they are grown. Essentially the region has a number of interesting geological inheritances – including a yellow almost sandy clay, full of seashell inclusions, which allows water to drain right through, and a more shale-like grey clay which funnels the water across it. These grey clay wines have a noticeable minerality, and the sea shell ones also have a definite inorganic steely character which gives the wines strength and character.

My favourite fun fact of the trip so far is that Arneis is actually a word in the local dialect for ‘little rascal’ – it’s the kind of thing you would call an unruly three year old. This is because of its temperamentality and difficulty to grow and vinify. This wine was light on the nose with touches of lemon and floral blossom. 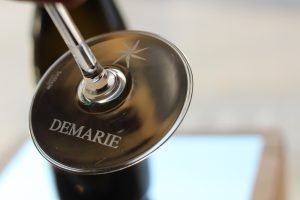 The taste was full of citrus, a dash of peach, strong minerality and a high acidiy that speaks of the rolling hillsides of this indigenous variety’s home. It was fruity with a light bitterness at the end – a simple finish almost like almonds. As you continued to drink, the bitterness gives a feeling of spice, and the peach notes give way to the impression of baked apple. So what comes across initially as quite a simply wine actually has a lot of interest and complexity. 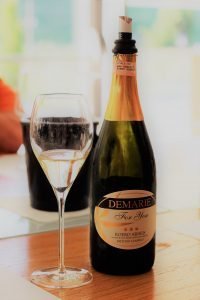 Metado Classico ‘For You’ Roero Arneis 2015

Two years in the bottle this extra brut wine is not made every year and is considered a bit of a fun project by the vineyard family. Normally such wines would be named after newborn children, but in this year too many people were pregnant to make that politic and so the delightful ‘For You’ was settled on as the fantasty name instead.

Again, the rounded almond bitterness on the finish and a slight fruity baked apple note from the Arneis was discernible, with a tight consistent mousse. We found a light cheese accompaniement really brought out the best in this wine, giving the fresh fruit notes more of a chance to shine.

Perhaps the most interesting of this side by side Arneis tasting was the orange wine. I’ve always been a fan and tipped this style for greatness since trying the orange wine at Chateau Feely. This 13% wine is made with 100% Arneis, from only 1000kg of grapes – the first commercially produced orange wine of this type. The 45 day fermentation of the whole bunches is innoculated with years but not temperature controlled. Within this delightful amber liquid, flavours of saffron, nuts, marzipan, honey and predominantly sultana interplay. There is also apricot kernel, and a creamy butter note from the MLF. The texture is thicker than the dry whites and enjoying it with a creamy cheese really brings out those baked fruit notes. 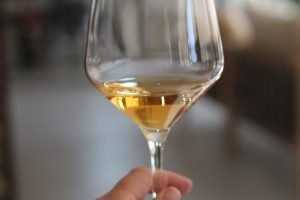 This year it has become evident to me that 2015 was a fantastic vintage for Piedmont. This wine is no exception. 18 month aged in used barriques (or at most 30% in new which is then blended to keep the oak flavours in check) this wine was awarded as the most expressive of the character of Roero in the region. The deep garnet wine was an absolute joy. Flavours of leather, meat and aniseed interplay with a great acidity and hefty tannin which while deeply drinkable now will serve the consumer even better in two years when the flavours of red cherry are more in balance with a softer tannin.

We were also incredibly lucky to be treated to a tasting of the Demarie Barolo 2013 and Barbaresco 2006, both of which were excellent expressions of the type – the Barolo full of savoury meat and spice flavours with a dash of orange juice and bergamot, while the Barbaresco was dominated by spicy liquorice. Both an absolute delight when matched with the balancing earthy notes of the prized Piemontese hazelnuts. What a joy.

Thank you to Demarie and Why Net for getting in touch and inviting me along to discover more about the wines of Roero. 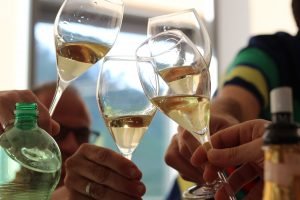