You all know that I go on endlessly about how much I love Leicester. I was struck by the wave of comments I received after my analysis of beer festivals concluded that most of us just want a nice social experience. And once again this week, I’ve had an experience that brought together the two elements.

With a little help from my friends

Social media alerted me to the fact that the Two Tailed Lion had a singular bottle of Tiny Rebel Dutty gin in stock. It is one of three special gins the brewery have released and certainly the most interesting sounding of the bunch. Although I wanted to try it it fell a little out of my price range as a ‘just out of interest’ thing. Step in The Internet! As a few of us felt the same way, we managed to arrange a group of guests via Facebook who all agreed to come down to the pub at the same time, split the cost of the bottle and taste the gin together – talk about community spirit! Big thanks in particular to Jamie Stenson who co-ordinated us, as he does with so many things in this city! 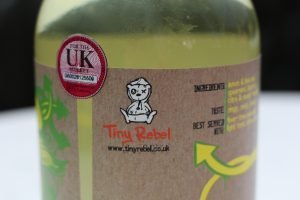 So the alloted day as decided via the hallowed Doodle came and we all traipsed in to the Two Tailed Lion. Tonics were bought as required and pots of ice, lemon and lime were placed on the table for us. Thanks to Matt and Alice for looking after us!

On to the gin and it has an interesting nose with notes of mint, lemon and anise coming through. The point is that the gin has been heavily hopped – which you can definitely see in the yellowy colour. I would never say it looks a bit like a slightly unhealthy wee. Nope. The citra hops really come through in the flavour which is predominated by lime flavours, but I can’t say that I was able to detect much from the mosaic hops. 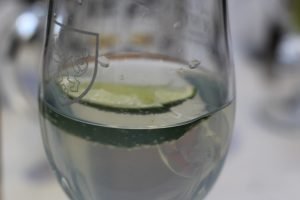 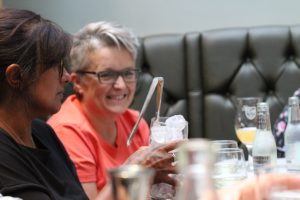 The flavour was quite nicely rounded and when added to tonic was very refreshing. However it was a bit one dimensional compared to the many other gins out on the market. I found that notes of liquorice root came out a bit further through as I was drinking it, Citrus fans will like it, serial gin conoisseurs probably won’t. I’m glad I tried it, but I don’t think I would buy it again. However, we had a splendid time enjoying the bottle with friends! 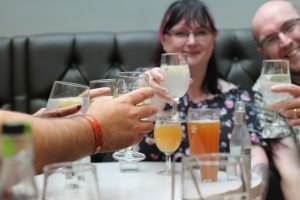