I recently wrote about the rise of mocktails. This was looking at the relative dearth of high quality, alcohol free cocktails. I was commenting on the obscene pricing that some poor quality mocktails command. Interestingly, since writing that post I have had more food for thought.
As mocktails were on my mind, the new offering from The Gadabout sprung out to me. They have been working with Seedlip, producers of the world’s first non-alcoholic spirits. The distilled spirits come from seventeenth century remedies. They are also sugar free and calorie free! Of course whatever you mix them with probably isn’t. 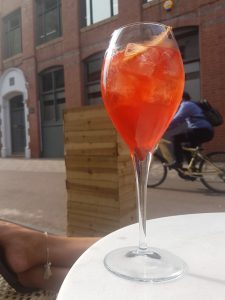 I popped in one day and gave one of their alcohol free range drinks a try. The drink had the appearance of an Aperol Spritz. The depth and complexity of flavour amazed me. It had rich blood orange tones and a bitterness that mirrored the original in every way. At £4 a pop, this seemed quite reasonable for the flavour experience the drink gave you.

So, is alcohol free the way forward?

In this instance, yes! If you’re looking for something that is a little unusual then go and try their range. Pop in for your after-work drinks one day and go home sober and happy.
That is not to say I am a total convert though. At the Great British Beer Festival this week I tried the low and no alcohol range from Braxzz. 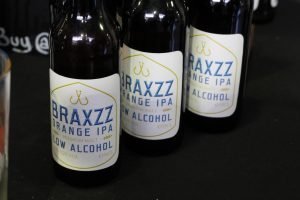 This brewery in Amsterdam is claiming to make the world’s first alcohol free porter. We tried this as well as The Boy giving the low-alcohol orange IPA a try.
These beers were not such a resounding success for us. The porter had rich, thick texture. The head was of a good size with tight bubbles. But the flavours felt undeveloped to me. There were notes of cocoa and coffee – but the bitterness was rough and undeveloped. I found this intriguing at first, but on the second sip it was unappealing. To the point where I made The Boy drink the rest so I could reclaim my glass. 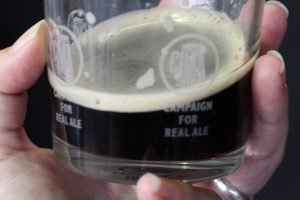 The Boy made similar noses about the IPA. It was orange flavoured to the point of overpowering everything else. So what is the difference between Seedlip and Braxzz?

I’m coming to the conclusion that the problem is fakes, replicas and substitutes. I understand that rather than just ‘not drinking’, there are many reasons people look for non-alcoholic products. And this can lead to the demand for alcohol free wines and beers. But these products are universally inferior to the original.
It’s like the conundrum when somebody decides to adopt a vegan diet but only eats chicken subsitute. Or tries to convince an omnivore that almond milk tastes as good as dairy. They don’t taste as good to the meat-eaters palate because the texture and flavour is all wrong. Plant fats are different to animal fats.
And so it is with wines and beers that strip the alcohol out. Brewing has been around for at least 7000 years. Unsurprisingly, we’ve got pretty good at it in that time. Humanity has learned to craft raw materials like grains and fruit into well balanced, delicious alcoholic drinks.

The evolution of food and drink

You can’t bypass millenia of artisan evolution overnight by taking the original and removing the booze. However, you can take centuries old recipes for distilling non-alcoholic spirits and make something interesting. Seedlip’s products are their own thing. They are not trying to fake it until they make it. It is a flavour profile all of it’s own. A profile that does not rely on the character that alcohol brings to other distillates.
It was not marketed as a No-Aperol Spritz. It was its own name with a unique description. The only element which I would be interested to go back and try separately was the non-alcoholic Prosecco component. I wonder if that falls down when served on its own.
Substitutes universally lack depth and character in my experience. There is no way (yet) of replicating the many chemical interactions that alcohol causes to create such fascinating range in wine. Take the alcohol out of the process and your wine is dull and flabby. You cannot (yet) fake the richness of animal fat that makes double cream so awesome. Sure, if you’ve not had real cream for decades then substitutes may well sate the craving. But someone with a rainbow palate will definitely know the difference.

Is this a problem?

Not really. It is everyone’s prerogative to seek out whatever they enjoy. But for my money I will be buying the real deal every time. And when I want something different – no alcohol, no meat, no dairy – I will seek a new flavour profile and accept no substitutes.