After attending the Great British Beer Festival in August, I have been mulling the experience over. It was the first time I have been to this national extravaganza. It is the jewel in CAMRAs crown – the biggest beer festival in the country with over 1000 different beers, perries and ciders on offer. But why has it been playing on my mind? 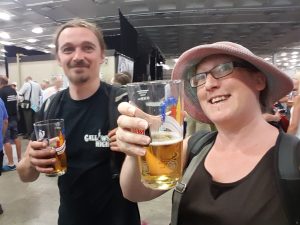 It’s quite simple – I didn’t like it. I had my pick of over 400 breweries, a huge range of food stalls, lots of fun traditional pub games to play. Yet I didn’t really enjoy myself. Truth be told, neither did The Boy. We mooched around for a couple of hours, then left to explore London and find a nice boozer with a beer garden to soak up the beautiful sunshine for the afternoon instead before heading for our train back to Leicester. Now anyone that knows us will know this is WEIRD. You usually have to prise my bloody fingers off the door frame to get me out of a beer festival.

The Great British Beer Festival courted some controversy this year, with a brewery I rather like – Tiny Rebel – pulling out just before it opened. But it was nothing to do with CAMRA policy, nor the way the beer festival was run. We agreed that the volunteers were excellent and made the event run incredibly smoothly.

I think I just found the event to be too big. There were so many breweries that I had not tried before that trying to make any kind of informed choice about what to choose seemed pointless.. And that’s even with my usual beer festival scattergun approach.  It was a good 30 minutes before we even spotted a programme, but I know from bitter experience that holding one just gets in the way, and so I didn’t bother buying one. But this meant no map and no indication of how the massive festival hall was set out.

Don’t get me wrong, this is not to say that we didn’t have fun and try some excellent beers. We also didn’t wander round complaining about what an awful time we were having. I’ve seen someone doing that at a beer festival in the past and trust me it’s not pretty. If you don’t like the condition of the beer at festivals, don’t go. If you don’t like all the people at beer festivals, don’t go. It’s not rocket science, it just makes you into a terminal bore. I just realised that I had had enough and when I mentioned this to The Boy, he was relieved to have the excuse to leave.

What is a beer festival?

So I’m left wondering why I absolutely adore beer festivals, but disliked this one so much. The obvious problem is that it was in London. I’m not a big fan of our nation’s capital, but this is more about scale and sociability. When I go to a smaller beer festival in Leicester, there are people I know. I can meet up with a group of friends, and bump into endless streams of other acquaintances while I’m there. This makes it more of a social experience.

The Great British Beer Festival is so huge, and so central (at the Olympia) you kind of have to plan to get there, and the people you are with are ‘your group’ for the day. This takes out a huge element of the fun for me – chatting with randoms didn’t really happen, and so I was less likely to get surprise beer recommendations to help me find something new.

You’re not from round here…

Rather than this strictly being a parochial thing on my part (although doubtless this is partly the case) I think I making an argument that the strength of a truly great British Beer Festival is its social aspect. There is more beer there than you can try. So that’s nice. Everyone’s doing their best to deliver it to you in the best possible condition. That is lovely. But being surrounded by a smaller crowd of people inspires conversation. You get more time to chat with brewers, publicans and fellow beer enthusiasts. Many are familiar faces, some are just friends you haven’t met yet. This is what I love about beer festivals.

In London, I felt I was walking an awful long way just to pick a beer at random then sit down with The Boy and drink it. It felt like trying a few different beers was sort of mandatory and the object of the exercise, rather than it just being a nice way to spend an afternoon. On the whole the condition was fine (although we did get a couple of humdingers!) And we’re usually quite content just the two of us – as nearly 16 years of marriage hopefully demonstrates!

This discussion puts me in mind of the campaigns aimed at lowering beer duty and helping to preserve the traditional British boozer.  See Long Live the Local. While those on the outside might just see us as an odd blend of possibly well-meaning and almost certainly misdirected pissheads (and there is undoubtedly some truth in that), we are a little community.

I have enjoyed watching the demographics of the beer festival grow and change during my beer career so far. The explosion in micro breweries and craft ale has certainly played its part in encouraging more younger people, more women and other previously ‘niche’ groups to attend beer festivals and to frequent their local. The social element cannot be overlooked. For me it is something worth defending.

What do you reckon? Am I on to something? Is the Great British Beer Festival a lot more fun if London is your local? Or does everyone have more fun when they go to a beer festival in a community hall with 15 beers and just 99 other punters? I’m interested in your thoughts.